March 2019
This newsletter is free. To subscribe just send a blank email with the subject SUBSCRIBE from the email address you wish to subscribe from – likewise to UNSUBSCRIBE.

Close on the heels of Chiron’s ingress of Aries comes another major paradigm shift with Uranus moving into Taurus bringing change to all things related to the sign of Taurus.

March has a strong Pisces / Neptune flavor with the New Moon in Pisces on March 7 and first 2019 Mercury retrograde in Pisces.

March begins with NO planets retrograde but Mercury changes direction on March 6.
Note: All the dates below are for Australian Daylight Eastern Time.

Besides the major shift paradigm shift symbolized by Uranus moving into Taurus [see section two for details], March is heavily influenced by the combined energies of Pisces and its ruler Neptune, with Neptune conjunct the March 7 Pisces New Moon and Mercury retrograding in Pisces and conjuncting Neptune three times as part of this journey: February 19, March 25 and April 2.

The powerful Neptune / Pisces energy can have many positive as well as challenging effects including enhanced sensitivity on all levels – physical, emotional and energetic - which can be wonderful for our spiritual practice, inner work and creativity, but much more challenging for getting things done in the ‘real’ world.

Neptune and Pisces are associated with confusion and possible delusion as they tend to see life through the proverbial ‘rose coloured glasses’. The challenges here are not to succumb to:

Be aware that with Jupiter square the New Moon [and Neptune] the potential for all these Neptunian states is heightened.

At its purest expression the Pisces New Moon can assist us to open our hearts and minds to the transpersonal and imaginal realms and to re-awaken us to the power of our dreams as well as the power of love and compassion…to see all life forms as one.

One way of honouring this energy is to take some time out to attend to our dreams and inner world, especially to connect with our feelings. Our feelings are our guidance system and too often we are too busy to open to the wisdom they offer. 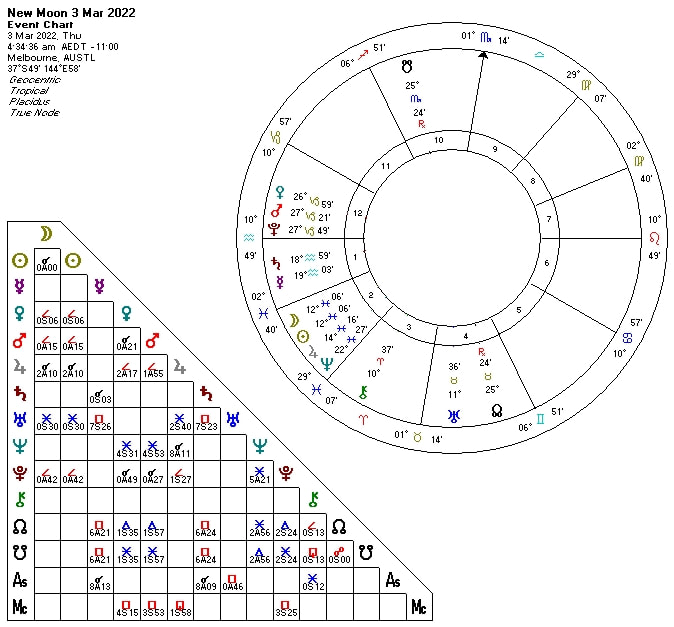 The March Full Moon takes place on the Autumn Equinox at 0 degrees of Libra with the Chiron conjunct the Sun and opposite the Moon. It is the third and final of three Supermoons / full moons which occur when the Full Moon occurs close to the lunar perigee, or the time in its cycle when it is at its closet to the Earth, creating the optical illusion of the Moon being bigger than usual. Super Moons can coincide with extreme weather patterns and phenomena such as earthquakes, tsunamis and volcanic eruptions. Energetically we can expect this to be a more emotionally charged full moon than usual due the super moon phenomenon.

The Full Moon in Libra always highlights the Aries / Libra polarity as the Sun is exactly opposite in Aries. We are challenged to balance our Libran need for partnership, co-operation and compromise with the Arian need for independence and autonomy. Libra embodies the feminine lover archetype and is concerned with fairness, equality, balance, harmony and is relationship or other-focused and inclined to compromise for the greater good while the Aries embodies the masculine Warrior archetype and is active, dynamic, competitive, forceful and egocentric. The full moon may bring to focus where we are out of balance here and it is often though the mechanism of projection that we see this more clearly.

At this full moon Chiron is conjunct the Sun and opposite the Moon, opening a doorway to the transpersonal realm and calling for us be true to our Self [or Higher Self].  We may feel called to take a stand that could activate fears of rejection, a price we  sometimes pay a price for moving beyond the stereotyped roles and rules of the collective.  Chiron’s prominence is a call to individuate and listen to our inner truth, even if our ego finds that uncomfortable.

Chironic forms of healing may well be very powerful at this time. Homeopathy, energy/ vibrational medicine and attending to the wisdom revealed through our dreams can all be especially potent. 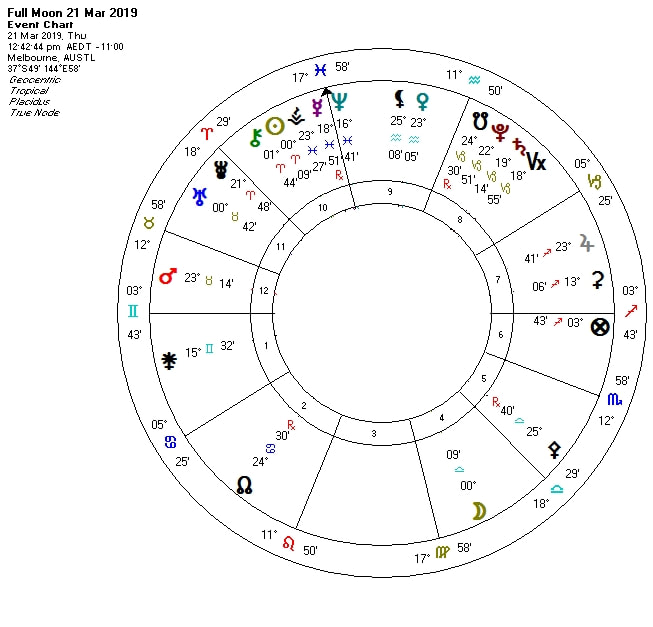 On March 6 Uranus moves into Taurus where it will stay until 2026, bringing change and possible disruption to the entire earthy Taurean domain which includes our values and resources, both personal and collective. Uranus in Taurus is not a comfortable combination as Uranus, the Rebel, wants change while Taurus values the status quo. A constructive outcome of this transit could be a time of change that values and respects the past and what has stood the test of time such as more forms of sustainable. Taurus is the Builder of the zodiac and rules money, wealth, agriculture, the natural environment; for a fuller list of the areas that are ripe for change scroll down to the list at the end of this article.

Uranus is named after the original sky god and takes 84 years to orbit the Sun, spending about seven years in each of the twelve signs. Uranus is a transpersonal planet, the first planet beyond the boundaries of Saturn and always challenges us to move beyond the limitations of our socialization and awaken to our individuality and larger truths. As a transpersonal planet Uranus serves the needs of the individual and collective soul, rather that the ego’s conscious wishes and desires.

Uranus is identified with the principle of change and seeks to destroy stagnant and out dated structures, beliefs and philosophies. His action is often confronting and challenging and can become chaotic and disruptive when we resist the change that our soul demands. The last time Uranus was in Taurus 1934 to 1942 when the world was being challenged by a number of tyrants – including Hitler, Mussolini and Stalin – and we were looking at how to deal with the aftermath of the Great Depression. Massive spending on infrastructure helped the US become a major world power.

Here is a list of the areas of life under the domain of Taurus which may come to prominence and be areas where we may see significant changes.  The choice is always ours [and of course humanity’s as a collective] whether the energy is used constructively or destructively. History tells us that there will probably be expressions of both polarities.
Looking at this list suggest that we will continue to see big economic changes as we shift to a digital economy, but all financial structures, including the world economy are ripe for change. As Taurus rules the earth and our natural environment I imagine we will see huge changes in farming and agriculture with increasing polarization between mass farming and the organic  alternatives, hopefully leading to more environmentally sustainable practices. The vegan movement will continue to flourish and the obesity may come more to the fore as we are forced to look more closely at unhealthy processed junk foods as well as toxic food production and farming practices. Clean energy will also gain more traction as we re-value Mother Earth.

Mercury moves retrograde on March 6 at close to 29 degrees of Pisces and remains retrograde until March 29 when it turns direct at close to 16 degrees of Pisces. Please be aware that the retrograde phenomenon is activated from the time that Mercury enters the loop to the time that it leaves: February 20 to April 17. The most chaotic times are when Mercury stations – the few days around March 6 and 29 when Mercury adjusts to the change of direction, but with the three conjunctions with Neptune [February 19, March 25 and April 2] the chaos will be intensified and extended well into April.

Key dates / degrees
The whole retrograde phase is a potent time for reflection and review … a time when we can become aware of habitual beliefs and thought patterns and make the adjustments necessary to align our thinking with the person we are now. This is a great time to meditate, reflect, research, seek answers, sort out your paperwork, return calls and generally attend to all the things you have been too busy to do earlier.

Currently Mercury is still visible in the evening sky but he will disappear for about two weeks when he is lost in the blaze of the Sun from around March 9 to re-appear in the sky just before sunrise around March 20. In esoteric terms this is the most intense and powerful part of the retrograde process as this when Mercury assumes his alter ego as Psychopomp and Guide to the Underworld. In this role Mercury is associated with the Egyptian scribe Thoth, who has access to the Halls of Record [Akashic records]. It is during this phase that we may have our most powerful insights and shifts, peaking around March 15 when the new cycle begins at the Inferior Conjunction of Mercury and the Sun. Esoteric writers suggest that the retrograde phase of Mercury creates an opening that allows access to the wisdom of our soul and the wisdom of the Cosmos.

Remember, Mercury retrograde always provides us with the opportunity to free our thinking from habitual ruts and develop a more conscious set of mental attitudes and beliefs. Concerns may arise early in the retrograde phase but around the time the new cycle begins on March 15 when new solutions and insight may emerge.  Sit with your insights until after March 29 when Mercury goes direct [but wait until a few days after April 2 when the last conjunction with Neptune occurs. The next few weeks are the time to express your insights and put new plans into action.

March 21 marks the Aries Ingress, better known as the Autumn Equinox in the Southern Hemisphere [Spring Equinox for our friends in the Northern Hemisphere].  At close to 9am [Australian Eastern Daylight Time] the Sun will move into the sign of Aries and will be exactly overhead at the equator. This marks the time when day and night are of equal length and heralds a major turning point; from now on the days will become shorter and darkness will soon prevail. [Reverse for the Northern Hemisphere]

The Autumn Equinox takes place a few hours after the Libra Full Moon so please read my comments about the lunation. 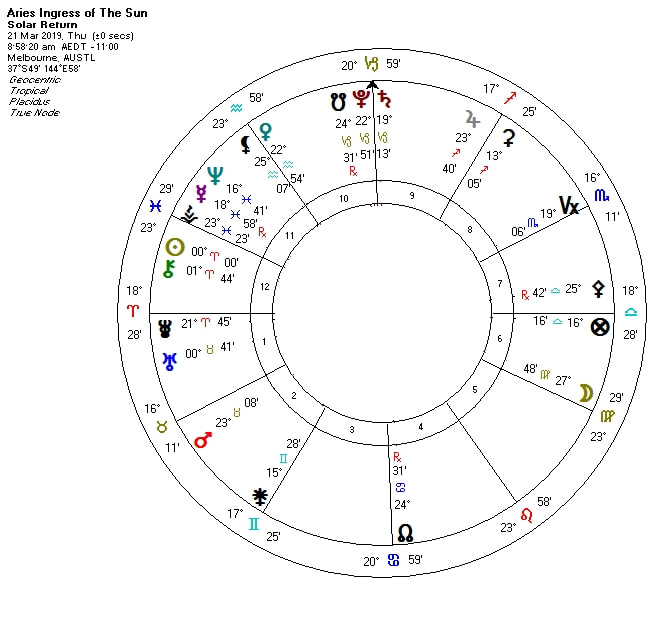