Both the Solar Eclipse of January 6 and the Lunar Eclipse of January 21 activate challenging collective patterns, making this a potentially stressful time. The pressure to make changes is strong, but so is the fear of change that can lead to paralysis or simplistic solutions that fail to come to grips with deep seated problems, personally and collectively.

Enrollment for 2019 Astrology classes is now open and there is an extra special early bird rate for those who pay the first term fees by mid-January. Please email if you would like more information.

All classes will be held at Sandybeach Community Centre on Beach Road, Sandringham.

January begins with only Uranus retrograde.  Note: All the dates below are for Australian Daylight Eastern Time.
We start 2019 with an eclipse season; the New Moon on January 6 is a solar eclipse and the Full Moon on January 21 is a Total Lunar Eclipse. Both these eclipses activate challenging collective patterns that call for profound change and a willingness to face deep fears.

The January New Moon is a Partial Solar Eclipse and falls on the 6th in the sign of Capricorn and is conjunct both Saturn and Pluto, giving us a foretaste of the conjunction that will take place between these two heavy weight planets in 2020. Political and economic instability and power struggles over who is in control are hallmarks of this pattern. Fear based responses to an increasingly unstable world have given rise to populist leaders with authoritarian tendencies whose strength seems to offer security. The next few years are looking quite challenging; astrology suggests that there needs to be major change but many are looking to the past [Saturn and Capricorn] rather than finding new ways forward. The imagery suggests we need to learn from the past, not repeat it.

On a more personal level the Capricorn New Moon is always an invitation to reflect on how we relate to the Capricorn archetypes of father and authority figures [external and internal], the world of career, ambition and achievement as well as the super ego, ambition, duty, responsibility, hard work, discipline and pragmatism…and the eclipse phenomenon heightens this experience, personally and collectively.

The shadow side of Capricorn can be authoritarian, judgemental, cold, tyrannical and ruthless. It can also be internalized as a strong inner critic that undermines our efforts to succeed and claim our authority. With both Saturn and Pluto conjunct the eclipse this is a powerful time for shadow work but it is also a time when the shadow side of power can come to the fore, so beware of your own tendency to become either the bully or the victim. 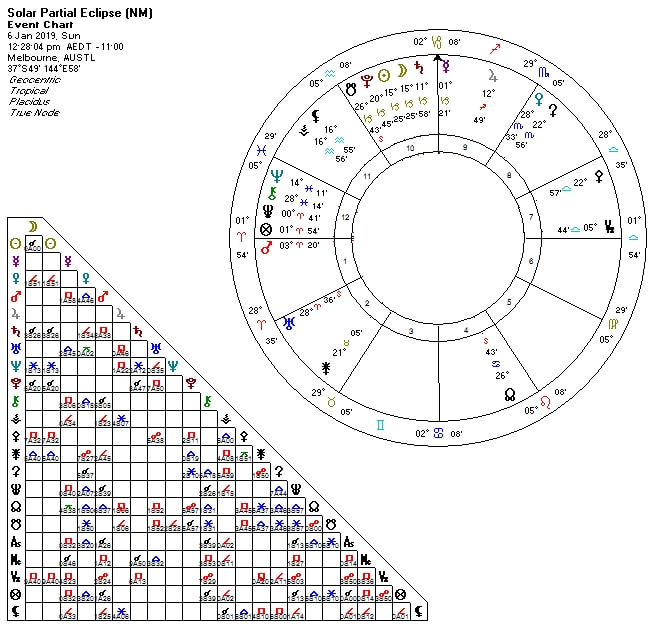 This is a powerful time to reflect on our relationship with our super-ego’s and our fears around owning our power. It invites us to reflect on what success, duty and responsibility mean to us at this point in our lives. Remember, we have a responsibility to ourselves as well as our family and careers and part of this review may involve setting clearer boundaries. Saturn often challenges us to do something that feels uncomfortable or fearful as part of the process of claiming our authority, sit with any challenges until you know it really is the right thing to do and you can do it with minimal aggression.

A few words about the impact of this eclipse on Australia …the eclipse is conjunct Australia’s Sun/ Saturn conjunction in the 9th house and transiting Saturn has been conjuncting these points over the last year. This suggests a time of major review and re-evaluation in the areas of our national identity and leadership and this has been very visible in both national and state politics.

Astrology suggests that this may continue throughout 2019 as the July eclipse will oppose this point and the December eclipse will form another wide conjunction to this point. This identity crisis has been going on for some time in the political sphere as Australia has also been experiencing transiting Saturn moving over our Sun and Saturn throughout 2018; the latter is often referred to as the  ‘Saturn Return’ which happens every 29 years. 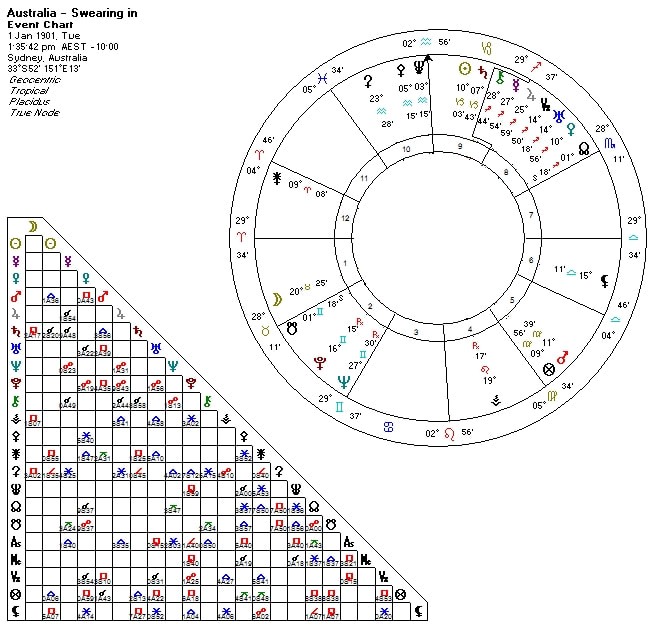 More generally speaking, solar eclipses are potent new moons that can only occur when the Sun, Moon and Earth align within 10 degrees of the transiting nodes of the moon. All eclipses can herald a crisis but they also provide the opportunity to wipe the slate clean and start again. Eclipses tend to be neutral energetically but they function to bring to the surface whatever has been buried, hidden and repressed.

All lunations [new moon and full moons including eclipses] have a powerful effect on the earth’s electro-magnetic field that can also affect our personal energy fields. Eclipses intensify this effect and the disruption they produce can create the opportunity to reorganize these fields in a more coherent way. It is possible to see where we are sabotaging or connecting with our soul’s desires and align ourselves with our inner truth. Meditation and quiet self-reflection allows both the space for the messages from our soul /unconscious to be heard and the stillness needed to align with the creative / re-organizing potential of these celestial events.

If your birthday is five days either side of the solar eclipse it could mark the end of a period of difficulty. It will be very empowering to set new intentions for your life and create a small ritual to honor this event.

The January 21 Full Moon is also Total Lunar Eclipse which falls at 0 degrees of Leo. Lunar eclipses are caused by the Earth’s shadow falling on the Moon and are visible anywhere it is dark. As this eclipse falls at 4.15pm along the eastern coast of Australia it will not be visible as it will still be daylight. The eclipse makes a wide conjunction with Pluto [nearly 10 degrees] and a tighter square to Uranus, reactivating the Pluto Uranus square that has been a key part of the astrological landscape since 2012.

Uranus squared Pluto exactly seven times during 2012, 2013, 2014 and 2015. The Uranus / Pluto cycle is the second longest planetary cycle in the zodiac [Neptune / Pluto is the longest] and its length varies from 110 to 140 years. It has the dual function of destroying old ideologies and structures and seeding new ones. It takes us into new terrain - whether we like it or not - and signals a major paradigm shift.

This is part of the waxing square which symbolizes a crisis that calls for new structures and ways of being. The constructive expression of this transit calls us to

The economic ramifications of this aspect are massive as Pluto rules debt in financial astrology. The build up to this aspect began in 2008 when Pluto moved in Capricorn and triggered the Global Financial Crisis.

Personally, the Pluto square to Uranus invites us all to look at what needs to change [Uranus] and what we need to let go [Pluto]. The Uranus square to Pluto symbolizes the need for major re-structuring on both collective [social, economic, political] and personal levels, especially in the domains of Capricorn [public life, career, ambition, personal authority, duty and responsibility] and Aries [warrior and pioneer archetypes that require freedom to do their ‘own thing’]. 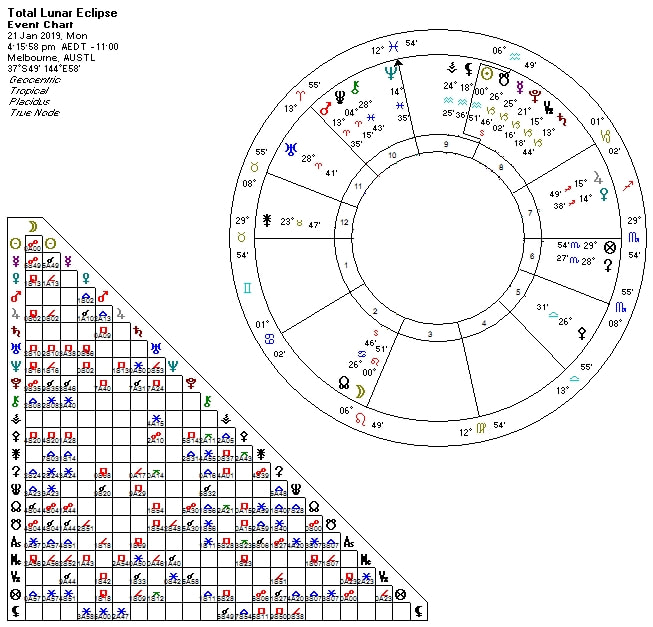 Lunar eclipses tend to be more emotional and internal than solar eclipses. They stir up whatever is simmering in our subconscious and invite us to reflect and see things from another more objective [solar] perspective. Sometimes this may lead to the desire to act, but more often they are potent times for insight and illumination.

Generally speaking, lunar eclipses [and all full moons] highlight a sign and house polarity as the Moon opposes the Sun. This eclipse falls in the Leo / Aquarius polarity and asks us reflect on how we balance these two energies. The Leo archetype encompasses the performer and the monarch [King and Queen] while the Aquarian archetype includes the rebel, the reformer, the humanitarian and the social worker. Leo’s challenge is to master the ego while the Aquarian challenge is to be a vehicle for reform and social change. This eclipse is asking us to find a way to balance our personal, ego based needs with those of others.
May the Goddess & God Bless You All
Christine

Please ring or email for a brochure.
christinerothwell@outlook.com
Or
www.christine-rothwell.com