August 2022 Newsletter
This month I am focusing on the triple conjunction of Uranus the North Node and Mars as one of the peak moments in the transit of Uranus through Taurus.


August begins with Pluto, Neptune, Chiron, Saturn and Jupiter all retrograde and with Uranus joining them on the 24th.
Note: All the dates below are for Australian Eastern Standard Time.

On August 1 - Australian Eastern Standard Time – the North Node and Uranus meet at 18 Taurus 41 and the following day Mars makes an exact conjunction with Uranus. 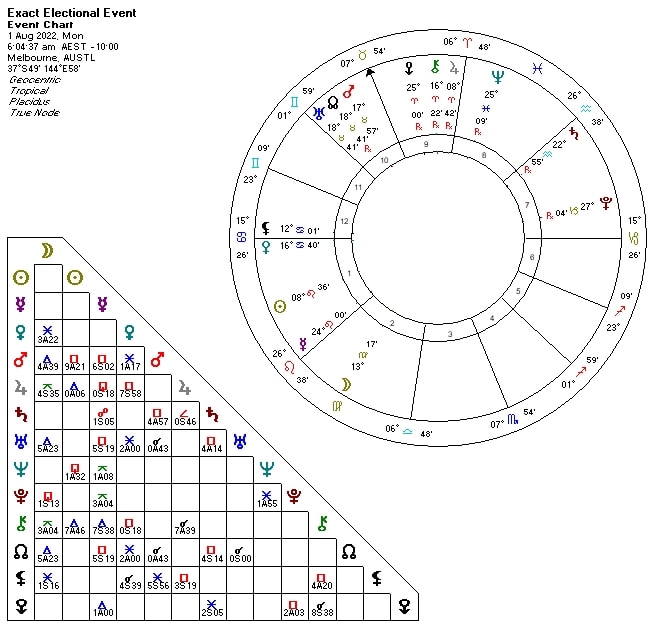 Let’s see if we can unpack these meetings.

These transits may mark significant events but they are actually highlighting the long term  transit of Uranus through Taurus [2018 to 2026] and challenging us to move in new directions in all symbolized by the sign of Taurus. Uranus in Taurus is not a comfortable combination as Uranus wants change while Taurus values the status quo.

Most of you will know that Uranus is the referred to as the Great Awakener and is said to be the planet that suggests the need for major change. Like all the planets, He symbolizes process that can be both functional and dysfunctional, often simultaneously!  His action is often confronting and may become chaotic and disruptive when we resist the change that our personal and collective soul demands. As Howard Sasportas has said, we can meet Uranus through choice or coercion.

Uranus is named after the original sky god and takes 84 years to orbit the Sun, spending about seven years in each of the twelve signs. As a transpersonal planet and the first planet beyond the boundaries of Saturn, Uranus always challenges us to move beyond the limitations of our socialization and awaken to our individuality and larger truths. He serves the needs of the individual and collective soul, rather that the ego’s conscious wishes and desires.

The North Node is also transiting Taurus – joining Uranus from January 2022 to July 2023 - and its meeting with Uranus may act as a trigger or catalyst for change. Many of the changes we are seeing in our world at the moment are quite disturbing, but this transit calls us - personally and collectively – to focus our attention and consciousness in the Taurean domain and: move out of our comfort zone [denial], be open to new information, be willing to be challenged to grow …and embrace new opportunities for growth & consciousness, all in the realm symbolized by Taurus.

Taurus is the Builder of the zodiac and is associated with money, wealth, agriculture and our relationship with the natural environment but – perhaps more importantly – it is  how these things are a reflection of our VALUES.

On the personal level this stellium will fall in the area of our horoscope where 18 degrees of Taurus is found and will activate planets around 18 degrees of fixed signs [Taurus, Leo, Scorpio and Aquarius]. We are all being challenged to step out of our comfort zone and become more conscious and embrace a new, more soul centred perspective around:

The question arises: What long term security do we have with the current world chaos due to climate change and the use  and abuse of Mother Earth’s resources?

Below are more Taurean concerns which have [quite dramatically] come to prominence and are undergoing massive changes.  The choice is always ours [personally and collectively] whether the energy is used constructively or destructively. Areas of concern:

The standout concern at the moment is climate change [floods, fires, droughts] and how this is impacting on our basic survival as well as the world economy. Climate change is destroying homes and livelihoods [very Taurean] and causing food shortages.

We need to change how we deal with the environment, housing, food supply, natural resources.

The global economy is experiencing inflation and upheaval as markets are no longer predictable, mainly due to climate change and the invasion of Ukraine.

Major powers are becoming more aggressive and wanting to reclaim territory that they believe belongs to them. It is of significance to note that the last time Uranus was in Taurus -1934 to 1942 - was when the world was being challenged by a number of tyrants – Hitler, Mussolini, Stalin – and we were looking at how to deal with the aftermath of the Great Depression. It does not take much imagination to see this in the world right now.

Remember, we can meet Uranus through choice or coercion, and the latter is often very chaotic and disruptive,,, like the world at the moment. This suggests we need to make actively/ consciously some make some new choices.

Hopefully more world leaders will realize that they need to make CONSCIOUS choices to restore stability to our planet. A commitment to renewable energy would be a good start.

A few words about the conjunction of Uranus and the North Node in Australia’s chart.

Australia’s Moon is at 20 degrees of Taurus 25 minutes and forms no major aspects [see chart below]. Our Moon has been activated quite powerfully by the current transits and will continue to be activated next year when Uranus forms a series of exact conjunctions. Un-aspected planets can be very strong as there is little to modify their expression, but they can be dormant until activated by significant transits. Our Moon in Taurus suggests the inherent conservatism of Australians and also our obsession with home ownership, but it also symbolizes the feminine principle. The voices of women and the feminine have gained power under recent activations. 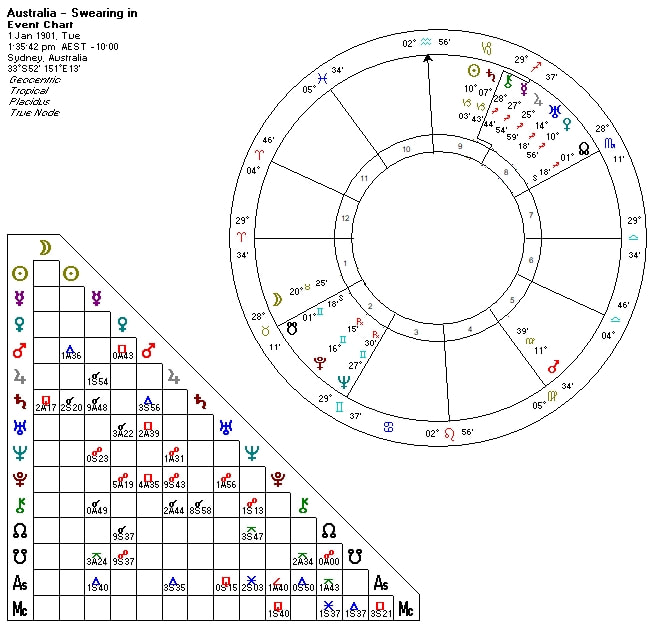 The solar and lunar eclipses were in the Taurus Scorpio polarity during May election period and heralded a change of government, one that saw an increase in Teal and Green candidates, many of them women. The NN was conjunct the Moon early in July and finally it looks as if Australia will have some sort of legislated carbon emissions target; perhaps not what many of us would like, but a start.

Both the Teals and the Greens speak more for the feminine as they are also champions for Mother Earth.Both groups have many female representatives and supporters. It seems that the women of Australia [and their allies, whatever their gender] are finding their voices and with Uranus conjunct the Moon next year they will have a lot more to say. 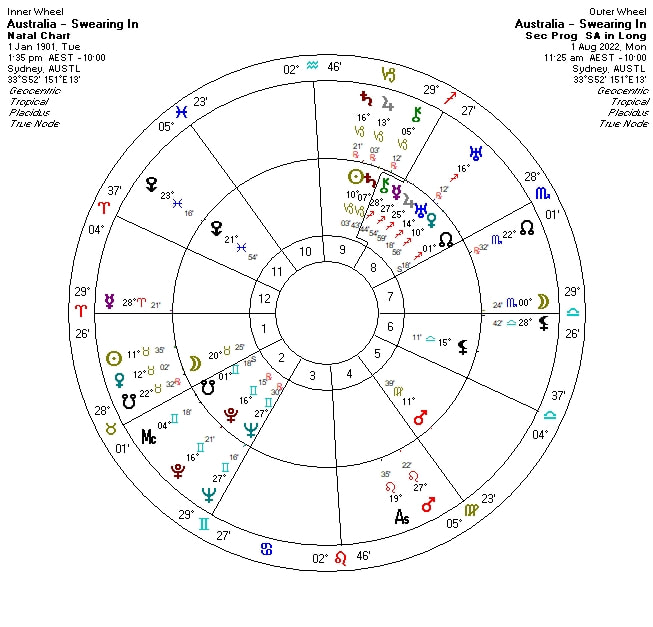 May the Goddess & God Bless You All
Christine
www.christine-rothwell.com
christinerothwell@outlook.com

Christine offers an in-depth psychological and mythological approach to astrology. Her classes are suitable for those individuals who are wishing to learn more about themselves as well as those interested in becoming a professional astrologer.

All classes are on Zoom. Video files are provided for any classes you miss, and it is possible to enrol for  video content only [correspondence].

Advanced Group
Second Saturday afternoon each month.
The Advanced Classes give you the opportunity to integrate what you have learned through a seminar format that allows exposure to more advanced techniques and psychological perspectives, plus the opportunity to develop your delineation skills.

Consultations
are now on Zoom
and are still recorded so the sound file link can be sent to you via email.

AN INITIAL CONSULTATION explores the soul’s journey as revealed through the personal symbol of the birth chart.  The focus is on the potential inherent in the birth chart and the challenges that need to be embraced to realize this potential.
Other readings available include:
In-depth Consultation: Two hours to explore both the soul’s journey [see above] and the year ahead. Includes 2 or 4 supplementary e-booklets.
Chart Up-date: The Year Ahead: Explores the year ahead from a psychological perspective.
Understanding Your Child: A wonderful gift for new parents and explores a child’s unique needs, motivations, potentials, and challenges.
Relocation:  Explains how a different location may impact on your psyche. This can be helpful if you are thinking of re-locating and can be included with any of the above consultations.