February 2020
This newsletter is free. To subscribe just send a blank email with the subject SUBSCRIBE from the email address you wish to subscribe from – likewise to UNSUBSCRIBE.
The New Year has begun with much fear, sadness and chaos, especially here in Australia so I I have added a few more reflections on the bush fires and the new fear, the corona-virus.

Enrollments are now open for my 2020 Astrology Classes.   Please contact me if you would like more information about the classes and February early-bird rates.

Contents
February begins with no major planets retrograde, but Mercury will make its first station retrograde on the 17th. Note: All the dates below are for Australian Eastern Daylight Savings Time.
A few more ruminations on Australia’s transits…
When I was writing the last newsletter, Australia was facing out of control bushfires all along the east coast. Most of those fires are still burning and the extent of the damage to our environment, wildlife, farm animals, homes and people’s lives and livelihoods is still being reckoned. We also have to contend with the economic damage, especially in many regional communities. It is feared that some communities may not survive the destruction and it may take years to heal and rebuild on all levels.

One of the key indicators of the fires – Uranus in Australia’s first house square our IC MC - still has one more transit to play out [on February 6], so we are by no means in the clear. This transit suggests that Australia’s image as a ‘lucky country’ has been irrevocably altered, perhaps even trashed, as our national government still seems to be in denial about the reality of climate change and Australia now seems far from a safe place to live and visit.

My interpretation is that the fires are Mother Nature’s way of telling us [and the world] that we really need to address the issue of climate change. At the moment it seems like the state governments   - from both major political parties - will be the agents of change while the Federal Government remains in denial of the problems. And it seems the scientists, environmentalists general population who accept the science of climate change have an unlikely ally in some large business groups – both locally and internally – who can see that climate change is bad for business.

And now the corona-virus…
The Boxing Day Solar Eclipse in Capricorn along with the January Lunar Eclipse in Cancer [opposed by a stellium in Capricorn] including the conjunction of Saturn and Pluto all suggest the current world view is heavily influenced by the Capricorn / Saturn archetype which can easily become overwhelmed by negativity and fear. The current fear and hysteria around the coronavirus is another manifestation of this dark energy. I encourage you to not give in to this fear and to try believe positive change is possible in all area; anger and hatred only breed more anger and hatred.

There is also another danger here; that the ‘authorities’ may use the virus as an excuse to tighten controls, a very dark and shadowy Pluto/Saturn image.

Remember, working constructively with the energy requires us to:
• Honestly re-evaluate the structures we have created in our lives, both personally [internally as well as externally] and collectively.
•  Re-structure and transform the structures that no longer serve our true self and the world that we hope to leave for our children and grandchildren.

We are all challenged to stay grounded, not give in to fear and blame and find constructive ways to move forward. Saturn and Capricorn are always a call to take action – TO TAKE RESPONSIBILITY FOR THE SITUATION WE FIND OURSELVES IN, CLAIM OUR AUTHORITY AND DO SOMETHING CONSTRUCTIVE.

The Full Moon on February 9…
falls at exactly 20 degrees of Leo and is at the apex of a yod formation, with the Moon quincunx to Neptune, Saturn, Pluto and Jupiter. This is a powerful image that we are at a fork in the road and need to change direction. In order for this to be successful the change of direction needs to harness energies that have little in common. The quincunxes from Neptune, Saturn, Pluto and Jupiter call us to harness the constructive qualities of these planets -hope, willingness to take responsibility as outlined above] and not give in to denial, fear, blame etc. A positive manifestation of this may the way business interests are to form an unlikely alliance [at least theoretically] with environmentalists to pressure governments and business interests to cut emissions. Certainly the image contains the potential for a new dialogues to begin and new directions to be taken.

Generally speaking, full moons highlight a sign and house polarity as the Moon opposes the Sun. This full moon emphasizes the Leo / Aquarius polarity and asks us reflect on how we balance these two energies. The Leo archetype encompasses the performer and the monarch [King and Queen] while the Aquarian archetype includes the rebel, the reformer, the humanitarian and the social worker. Leo’s challenge is to master the ego while the Aquarian challenge is to be a vehicle for reform and social change. 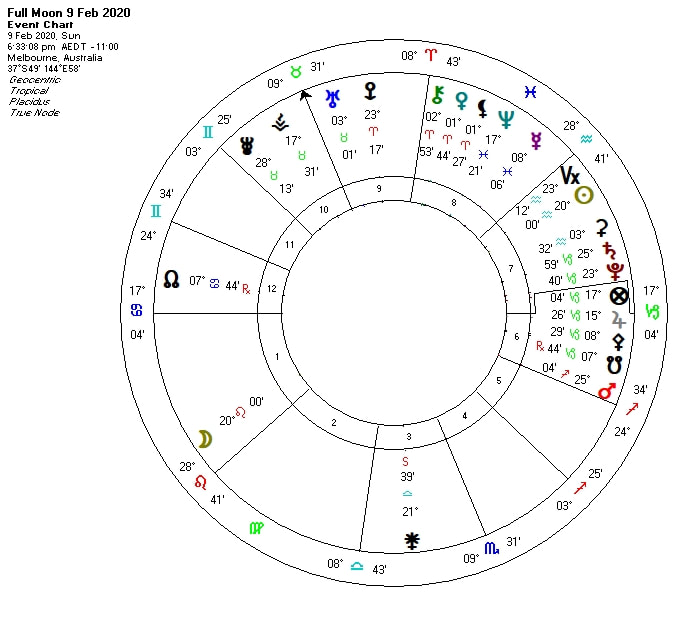 The Leo Full Moon challenges us to reflect on our need to shine, feel special and appreciated and discover outlets for self-expression and play. The proviso here is to beware the shadow side of Leo …egotistical and attention seeking behavior.

Mercury Retrograde…
Mercury moves retrograde on February 17 at close to 13 degrees of Pisces and remains retrograde until March 10 when it turns direct at close to 28 degrees of Aquarius. As the new cycle begins in Pisces, we are being challenged to re-evaluate all things connected with our Piscean patterns, a theme repeated in the New Moon 2 days later.  [see below]

Currently Mercury is still visible in the evening sky but he will disappear for about two weeks when he is lost in the blaze of the Sun from around February 21 to re-appear in the sky just before sunrise around March 2. In esoteric terms this is the most intense and powerful part of the retrograde process as this when Mercury assumes his alter ego as Psycho-pomp and Guide to the Underworld. In this role Mercury is associated with the Egyptian scribe Thoth, who has access to the Halls of Record [Akashic records]. It is during this phase that we may have our most powerful insights and shifts, peaking around February 26 when the new cycle begins at the Inferior Conjunction of Mercury and the Sun at close to 7 degrees of Pisces. Esoteric writers suggest that the retrograde phase of Mercury creates an opening that allows access to both the wisdom of our soul and the wisdom of the Cosmos; psychologically we can see this as a metaphor for accessing the power of the unconscious mind.

Remember, Mercury retrograde always provides us with the opportunity to free our thinking from habitual ruts and develop a more conscious set of mental attitudes and beliefs. Concerns may arise early in the retrograde phase but around the time the new cycle begins on February 26 when new solutions and insight may emerge.  Sit with your insights until after March 10 when Mercury goes direct. The next few weeks are the time to express your insights and put new plans into action.

The New Moon on February 24…
falls at close to 4 degrees of Pisces and makes a number of flowing / harmonious aspects with a conjunction to Mercury and sextiles to Mars and Uranus. The New Moon falls when Mercury is retrograde, and two days before the new Mercury cycle starts on February 26.

This suggests an introverted mood that encourages reflection and attention to our feelings and intuition.
Our sensitivity will be enhanced, which can be wonderful for our spiritual practice, inner work and creativity, but much more challenging for getting things done in the ‘real’ world. There is also the danger of getting lost in our escapist patterns – we all have them – and not wanting to see the truth. You can honor the energy by taking some time out for dreaming and attending to your dreams well as connecting with your feelings.

The highest expression of this energy is to open our hearts and minds to the transpersonal and imaginal realms and to embrace a  compassionate, heart centered perspective. 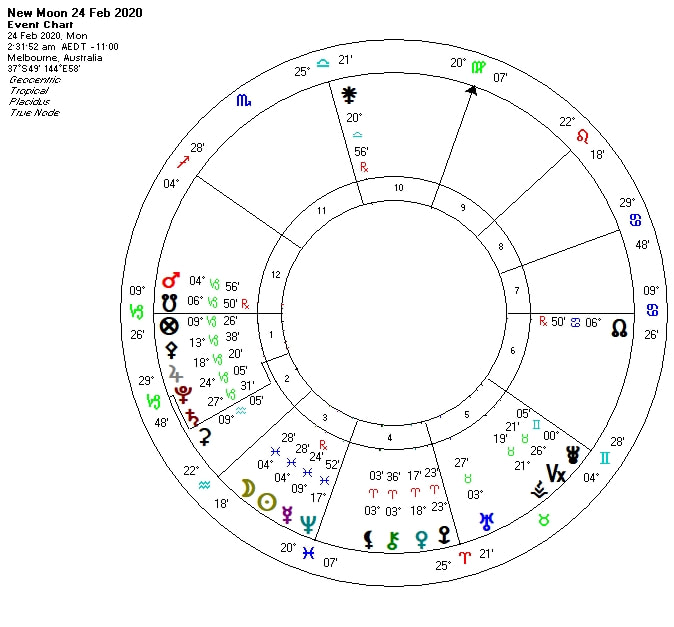 Advanced Group: Second Saturday afternoon each month, beginning in February. The Advanced Classes give you the opportunity to integrate what you have learned through a seminar format that allows exposure to more advanced techniques and psychological perspectives plus the time to develop your delineation skill.