October 2015 Newsletter
This newsletter is free. To subscribe just send a blank email with the subject SUBSCRIBE from the email address you wish to subscribe from  to christinerothwell@outlook.com– likewise to UNSUBSCRIBE.

Relationship continues to be a major theme this month as both the New Moon on October 13 and the final part of the Mercury retrograde cycle occur in the relationship oriented sign of Libra. However Libra also stirs up concerns about fairness and on the larger scale that translates to social justice. The New Moon also re-activates the square from Uranus to Pluto, maintaining the pressure for personal and collective change and transformation.

On the afternoon of Saturday October 17 I am presenting a paper on Pluto, Fear and Initiation at the Victorian Federation of Astrologer’s meeting in South Melbourne, details below.

May the Goddess and God Bless You

Presented by Christine Rothwell for the VAA

At the South Melbourne Community Centre,

Pluto stands at the threshold of the Kuiper Belt, a vast, unexplored and largely un-imagined part of the heavens. As gatekeeper to this realm, Pluto calls humanity to a new level of consciousness that requires us to find ways to honour and work with his energy. Pluto’s presence – whether through natal or transiting aspects – often reveals fear and anxiety, but this fear can also be experienced as an awakening and a doorway to something larger.

All dates and times are for Australian Eastern Standard Time [AEST].  October begins with Mercury, Chiron, Uranus and Neptune retrograde.


Mercury Direct
At the start of October Mercury is still retrograde and invisible in the sky as He is lost in the blaze of the Sun. He will re-appear in the sky just before sunrise around October 6.

Concerns may have arisen early in the retrograde cycle but around the time the new cycle begins on October 1, new solutions and insight may emerge.  Sit with your insights until after October 10 when Mercury goes direct. The next few weeks are the time to express your insights and put new plans into action.

The most chaotic times in the retrograde phase are when Mercury stations – the few days around September 18 and October 10 when Mercury adjusts to the change of direction.

Key dates / degreesThe whole retrograde phase is a potent time for reflection and review … a time when we can become aware of habitual beliefs and thought patterns and make the adjustments necessary to align our thinking with the person we are now. This is a great time to meditate, reflect, research, seek answers, sort out your paperwork, return calls and generally attend to all the things you have been too busy to do earlier.

Mercury’s retrograde cycle occurs in the sign of Libra, inviting us to reflect on all things Libran including our partnerships and relationships [business and personal] as well as concerns about what is fair and just. The conjunction of Mercury and the Sun on October 1 may illuminate some patterns and issues that need to be discussed. The New Moon on October 13 continues this theme and calls for action.

Remember, Mercury retrograde always provides us with the opportunity to free our thinking from habitual ruts and develop a more conscious set of mental attitudes and beliefs.

The New Moon in Libra
The New Moon on October 13 also falls in the sign of Libra [scroll down to see the chart], further illuminating the area of our chart [and psyche] where Libra is located… the area of life where we have a need for partnership, equality, cooperation and fairness. Fairness and social justice come sharply into focus as well as our needs for harmony and compromise. We may notice unfairness more and we may be challenged to see where we have become out of balance in all areas of our lives. This is also potent time to reflect on our significant one-on-one relationships and see if / where they need more attention.

New Moons are potent times for new beginnings where we can set conscious intentions and take action. As this New Moon falls a few days after Mercury has moved direct in the same sign it looks very much like a call to honour this process around all the concerns outlined above …time for a fresh start.

The New Moon in Libra on October 13 also triggers the Uranus square to Pluto as it forms a fairly tight opposition to Uranus in Aries and a wider square with Pluto in Capricorn. This alignment is a world changer and an indicator of the need for major political, economic and social change. Psychologically it  asks to let go fear that keeps us holding onto things / people / habits  [Pluto in Capricorn],  and open to new, perhaps quite different paths / patterns / solutions that give us more freedom and the ability to express our individuality [Uranus in Aries].

Whatever has outlived its present form needs to be transformed or destroyed… and the more we are able to let go and open to new solutions, the easier it will be for us personally and collectively. Uranus and Pluto are both transpersonal planets that serve the soul and the higher good. The major change they bring is often uncomfortable and confronting for the ego, but ultimately transformative for the soul.

Saturn sesqui-square Uranus
On October 23 Saturn will sesqui-square Uranus for the last of three ‘hits’. The sesqui-square is a minor aspect of tension that is said to create friction and irritation. This is part of the Saturn / Uranus Cycle that began in 1988 when Saturn last conjuncted Uranus, heralding the end of the old communist structures when Berlin Wall came down and the USSR underwent a meltdown. The energy reached another crisis point when the two planets formed a series of oppositions during the between 2008 and 2010. We are now in the waning phase of the cycle and experiencing another time of tension.

Here we see the two old mythological foes, Uranus and Saturn, forming an aspect that speaks of tension between the forces of change, freedom and liberation [Uranus] and the forces of fear, conservatism and the maintenance of the status quo [Saturn]: Saturn symbolizes the old, Uranus the new. Uranus also rules new technological inventions and innovation generally while Saturn is associated law and order, all administrative institutions including those in the domains of government and finance.

Both planets have their constructive and destructive sides and the sesqui-square tends to bring out the tension between them.  Somehow we need to find a way to use these two energies constructively so we can move forward as a global community. This highlights tension that calls for the

·responsible [Saturn] application of the New Technology [Uranus] in a way that doesn't create chaos [Uranus] or stagnation [Saturn]
·constructive change [Uranus] of governments, bureaucracies, law and order organizations and financial institutions [Saturn] so they can function more efficiently [Saturn] and reflect the current changes [Uranus] in the world situation

Personally, what might this mean?  We may all be called to make some form of adjustment in our thinking and attitudes that allows for stability and security as well as change and progress. We can begin by acknowledging any internal tension around these conflicting needs and noticing how we feel about this. Under the sesqui-square energy there is no ideal solution... but the tension can only be released when we are willing to find ways to own both urges, and especially to honor the one that has been most repressed.

The Full Moon in Taurus
The Full Moon in Taurus on October 27 [scroll down to see the chart] emphasizes the Taurus / Scorpio polarity which asks us to re-define our values and balance our need to create and build something tangible [Taurus] with our need to let go and allow the process of transformation [Scorpio] to take place. It also emphasizes the need to focus on what is mine [Taurus] and what is ours [Scorpio], especially in relationship.

This Full Moon forms a very tight quincunx to Saturn, challenging us to take responsibility for how we feel.  If we are feeling flat, depressed, unappreciated or overworked, Saturn is calling us to set clearer boundaries that honour our needs as well as our commitments to others.

Some questions for reflection
Do we need to let go and share more on any level …physical, emotional, financial, sexual...  ?
Have we given too much and need to reclaim some time, space, energy for ourselves?
What does intimacy and stability mean for you? Are you honouring your needs? Have you traded one for the other? 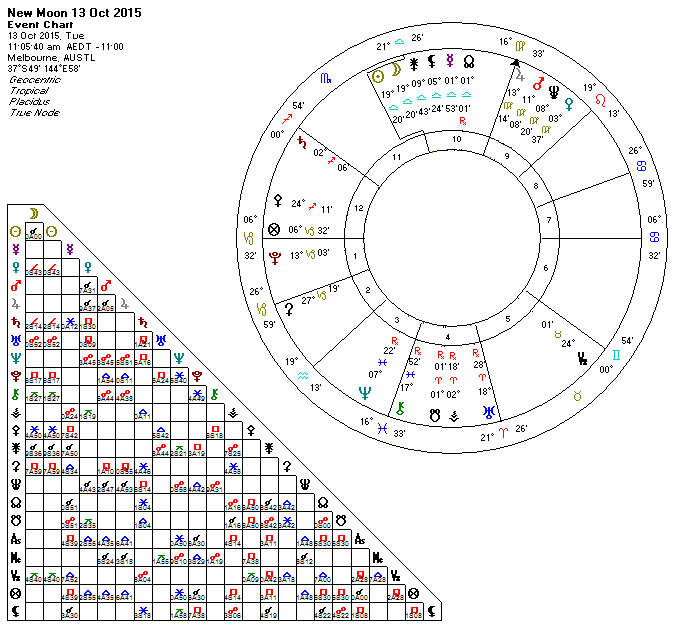 New Moon In Libra on October 13 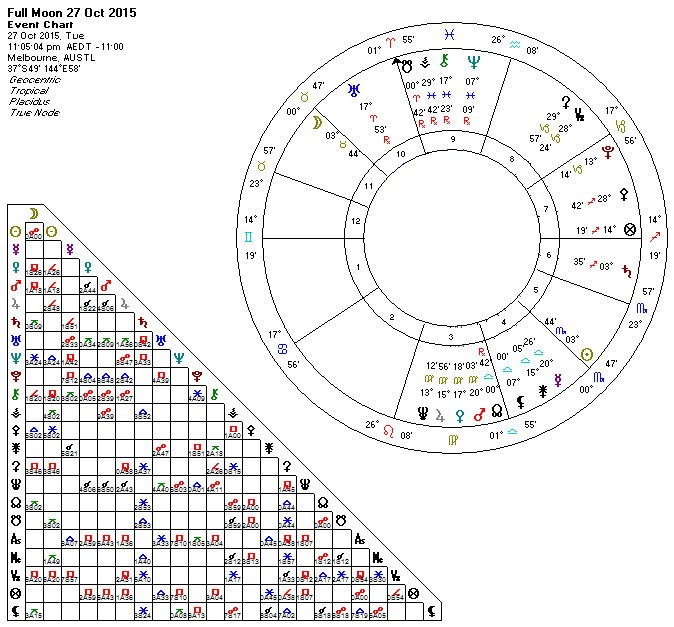 Full Moon in Taurus on October 27


Other readings available include:

In-depth Consultation: Two one hour CD’s exploring both the soul’s journey [see above] and the year ahead.

Relationship Analysis: Helps explain the dynamic between two people to facilitate their understanding of each other and themselves.