June 2017
This newsletter is free. To subscribe just send a blank email with the subject SUBSCRIBE from the email address you wish to subscribe from – likewise to UNSUBSCRIBE.
The square between Saturn and Chiron that was exact during May is prominent throughout June as it features prominently in the charts for  the Full Moon, the New Moon and the Solstice.

May begins with Jupiter, Saturn and Pluto retrograde.
All the dates below are for Australian Eastern Time.

This is the waning square in the Saturn Chiron Cycle that began at their conjunction in 1966. The key dates in this cycle are:

The Saturn Chiron Cycle challenges us to take responsibility for our personal and collective woundings - both internal and external - and in doing so become more authentic and less bound by our super ego and its conditioned fears.

Chiron has an extremely elliptical orbit and while he spends most of his 49 to 50 year cycle between the orbits of Saturn and Uranus he does cross inside the orbit of Saturn and Jupiter for about 8 years [the last time this happened was 1992 to 2000]. Chiron is therefore said to be a bridge or doorway from the collective realm of Jupiter and Saturn where we are educated and socialized  to the transpersonal realm of Uranus and beyond. Chiron challenges us to leave behind our super ego and its conditioned responses to a space of soulful authenticity that may mean standing alone and risking rejection from our family, peers and community.

This cycle began in 1966 when there was a new open-ness in society that allowed people to be more authentic and experiment with their identity and gender. Gender and racial stereotypes were broken and there was hope for a more tolerant and open society where anything was possible. There was also a growing awareness about our impact on the environment along with hope for a new world of greater equality and care for our Mother Earth and all Her Children, regardless of race, gender, ethnicity and religion.

We are now at the waning square in this cycle, which always suggests a crisis in consciousness and a deep need to look within and let go old patterns that limit and restrict us from being who we truly are and accepting ourselves and others as we are.  Society is once more being challenged to see the BIG PICTURE and develop a more transpersonal perspective, to become more INCLUSIVE and less RIGID, FEARFUL and PAROCHIAL.

On both personal and collective levels it may manifest in its shadow form as:

Ultimately this is a call to stand in our truth, forgive ourselves and others [Chiron in Pisces] and find ways to become more inclusive.

June Full Moon
The June Full Moon falls at close to 19 Sagittarius on June 9, exactly opposite the Sun in Gemini. This full moon highlights our beliefs and calls us to see the big picture. The Sagittarian quest is the Search for Meaning, hence this full moon invites us to step back and see the bigger picture in our lives and expand our awareness and sense of what is possible for ourselves and humanity.

The full moon is sextile to Jupiter and conjunct Saturn which squares both Neptune and Chiron, activating the story of the Saturn Chiron square already discussed, emphasizing the Jupiterian, Saturnian, Chironic and Neptunian archetypes.

Jupiter’s sextile to the Moon is a call to keep  faith and look beyond our fears.

Saturn reminds us to stay grounded and accept responsibility for whatever is going on in our lives. We may need to claim our authority and set clearer boundaries and not let the Inner Critic overwhelm us.

Chiron asks us to become more authentic, even if it means upsetting those closer to us.

Chiron and Neptune in Pisces challenge us to open our hearts, forgive and experience greater compassion for ourselves and those who may reject us.

Neptune in Pisces reminds us not to not get lost in our escapist /addictive patterns but to find ways of staying open to our feelings, however uncomfortable they may be. Any heart based practice will be particularly helpful around now. If we can stay grounded, mindful and open we can be a source of stability and comfort both for ourselves and others. 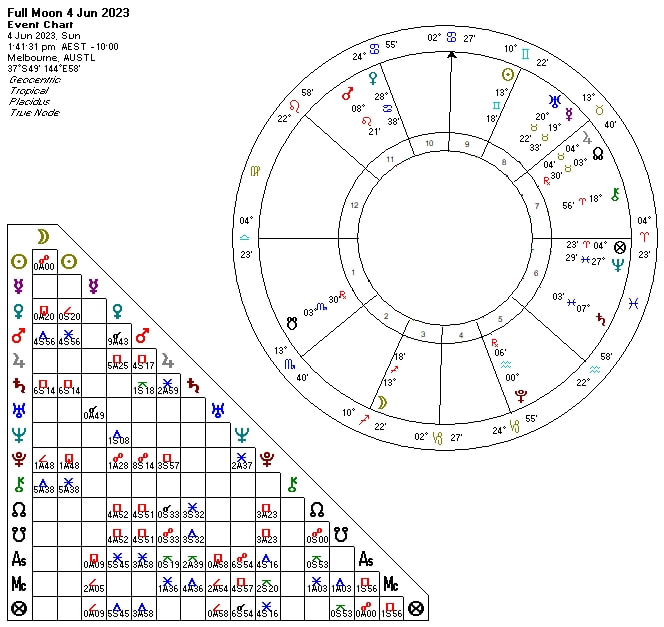 June New Moon
The June New Moon falls at close to 3 Cancer on June 24 and is the 3rd Super Moon in a row. Super Moons are New and Full Moons that occur when the Moon is closer to the Earth than usual. They are associated with extreme weather patterns and can amplify already heightened feelings.

The New Moon in Cancer is always time to reflect on family, the past, belonging and what constitutes our emotional security …and to set some new intentions around discovering and acting on what nurtures us.

The New Moon chart contains two dynamic and stressful t-square patterns that are also features of the Cancer Ingress / Solstice chart of June 21, suggesting that they will colour the collective landscape for the next three months.

The New Moon is conjunct Mercury and in a t-square pattern with the Saturn Chiron square, with Saturn opposite the New Moon and Chiron squaring them both, highlighting the themes already discussed..

The chart also contains another tense t-square with Mars coming up to oppose Pluto and Jupiter squaring them both. This pattern is highly charged and potentially aggressive, or perhaps more likely to be passive aggressive with Mars in Cancer.  Power struggles are possible, especially if we feel bullied, but beware over-reacting and see where and how you can become more assertive in a constructive way. 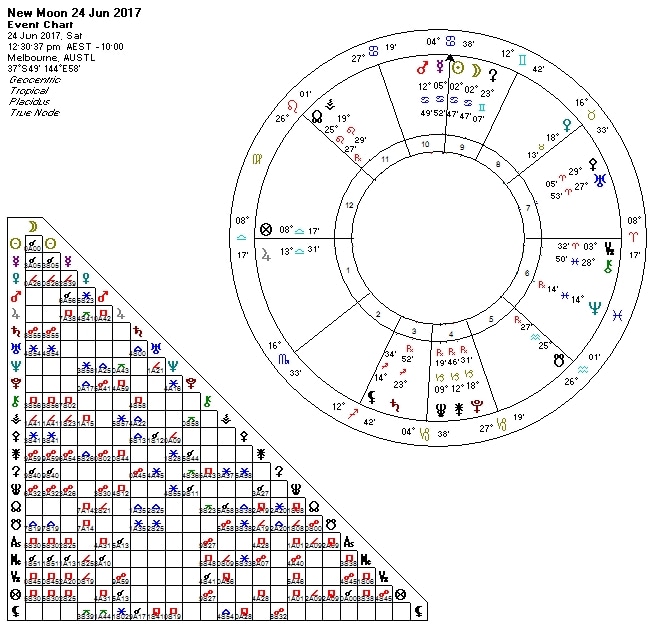 The Winter Solstice: June 21 [AEST]
The Winter Solstice [Southern hemisphere] or Cancer Ingress of the Sun marks the time of the longest nights and shortest days when the Sun is reborn from the darkness. The times of sunrise and sunset appear to stand still for two weeks before and after the peak time of June 21, and then the day light begins to slowly lengthen.  The Winter Solstice symbolizes the rebirth of the solar principle and the light and the divine spark within us all. It marks the beginning of a new solar cycle and is time for those of us who live in the Southern Hemisphere to create our New Year Resolutions and reflect on what we want to achieve in the coming year.

The Solstice marks the moment of the Cancer Ingress, the moment when the Sun is overhead at the Tropic of Cancer and moves into the sign of Cancer. The four ingress charts [the solstices and equinoxes] mark the turning points in the seasonal cycle and the annual solar cycle. As such they are given added weight in astrology and are considered to influence the next quarter, or 3 months.

The Sun is in a tight conjunction with Mercury, highlighting communications but it also opposes Saturn and squares Chiron, the signature theme of the month. My sense is that Saturn Chiron Cycle challenges us to take responsibility for our personal and collective woundings - both internal and external - and in doing so become more authentic and less bound by our super ego and its conditioned fears.

The Sun is also in a wide conjunction to Mars. Mars is part of a T-t-square formation as it is opposite Pluto and square to Jupiter, suggesting that the next three month may feature issues with anger and assertion as well as power struggles.

The most traditional way to celebrate the Solstice is to rise early on the day of June 21 to observe and honour the sunrise. Ideally you will find a place where you can observe the horizon, free of buildings and welcome the Sun as He appears. Allow yourself to be filled with wonder and gratitude for His rebirth. As the Sun gains strength and power, feel yourself being blessed with His light and vitality and invoke the blessing of the Divine Masculine for the year ahead.

A special Solstice meal is another wonderful way to honour this energy. This is the time for roast dinners and a roaring fire where a special Yule log was burned to honour the Sun and bring his warmth and radiance into the home. If you don’t have a fire then light gold candle to honour the Sun and invite his blessings into your life and home.

A more intimate ritual could also be called for…
Create a sacred space with candles, incense, meditation and intention. Tune into your inner guidance to find the seeds of new potentials that are stirring within your inner darkness. When you are ready, record the seeds in red or gold ink [as long as they do not seek to influence or harm any other individual] and then burn them in your fire or from your candle. As the paper burns, see your seeds flowering and your potentials manifesting as the fays grow longer and the Sun grows stronger. Give thanks and light your candle whenever you need to refresh your visions and intentions.

Advanced Group - one Saturday afternoon a month beginning May 13

The Advanced Classes gives you the opportunity to integrate what you have learned through a seminar format that allows exposure to more advanced techniques and psychological perspectives.