January 2018 Newsletter
The 22nd International FAA Conference is being held over the 18th to the 21st of January in Melbourne.  Day tickets are now available for those of you who do not want to commit to the full program. Check it all out at http://www.faainc.org.au/faa-conference-2018/

This month sees the second of three powerful Full Moon / Supermoons: the first in December, the second on January 2 and the third on February 1 [Australian Eastern Daylight time], with this month’s being the largest of the three.

Enrolment for 2018 Astrology classes is now open and there is an extra special early bird rate for those who pay the first term fees by mid-January. Please email if you would like more information.

Classes will be held at Sandy Beach Community Centre on Beach Road, Sandringham.

First year classes will be held on Tuesday evenings
Second year classes will be held on Thursday evenings.
The Advanced Group meets on the second Saturday afternoon each month, beginning in February.
Contents
January begins with only Uranus retrograde but stations direct on January 3.  Note: All the dates below are for Australian Eastern Daylight Time.
Mercury leaves the retrograde loop on January 11 after turning direct on December 23.
The time from December 23 to January 11 is optimal for putting into action insights that occurred during the retrograde phase [December 3 to 23]. As part of this cycle Mercury will conjunct Saturn for the last of three exact conjunctions  on January 13 [the other dates were November 28 and December 6], demanding that we take responsibility for our words and thoughts.

The January Full Moon / Super Moon
… on the 2nd emphasizes the Capricorn / Cancer polarity highlighting, issues around how we balance: our private and public lives, nurturing and accomplishment and family and career.

This full moon is the second and largest of three Super Moon / Full Moons in a row. Super Moons occur when the Full Moon occurs close to the lunar perigee, or the time in its cycle when it is at its closet to the Earth, creating the optical illusion of the Moon being bigger than usual. Super Moons can coincide with extreme weather patterns and phenomena such as earthquakes, tsunamis and volcanic eruptions. The continuing Super Moon phenomena suggest that the volcanic activity in Bali will continue and may peak again around these time: January 2 and February 1.
If you would like more information check out the EarthSky website but be aware that the dates / times are for the US. http://earthsky.org/?p=270121

Energetically we can expect this to be a very emotionally charged full moon due to both the super moon phenomenon combined with the fact that the Full Moon falls in its own sign: the very sensitive water sign of Cancer.

Cancer is a water sign that is associated with a need to belong and feel emotionally connected and secure. It symbolizes the parent / child relationship - especially the Mother/nurturer archetype - and home and family life in general. At the Cancer Full Moon the Sun is found in the opposite sign of Capricorn,  an earth sign, associated with complimentary polarity of  Father, career, public life and our experience of authority.

The Full Moon is opposite a big line-up in Capricorn and it forms an opposition aspect with Pluto, the Sun, Venus and Saturn [wide 10 degree orb]. This emphasizes the need to balance feeling, intuition and emotion with the grounded, pragmatic energy of Saturn and Capricorn that intensifies as the month continues, challenging us to walk our talk and ground our New Year’s resolutions. Saturn and Capricorn can also create a more sombre and serious mood that can lead to melancholy if we are resisting taking responsibility in some area of our life.

With Pluto in the mix the energy is intensified and this also comes more to the fore in the New Moon chart as the New Moon conjuncts Pluto. 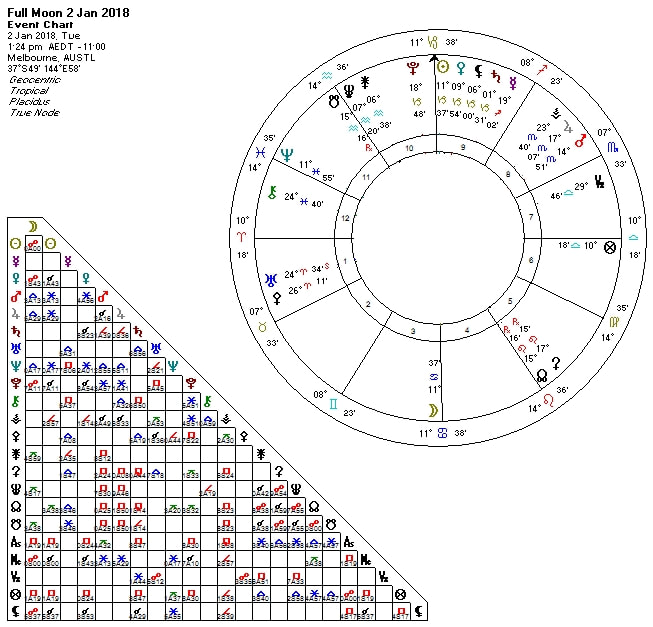 Uranus  stations direct at 24 degrees and 34 minutes of Aries January 3, adding a restless energy to the mix.  Uranus has spent the last five months retrograde - as it does each year - and it now sitting still [making his station], preparing to once more regain forward momentum. Uranus, the Great Awakener, symbolizes the urge to change, break free of limitations and express our individuality so sit with any impulsive plans that emerge around this time to make sure they are an authentic expression of your true self, not just a reaction to your circumstances and environment.

January New Moon
… on the 17th falls in the sign of Capricorn and this New Moon is always an  invitation to reflect on how we relate to the Capricorn archetype: the father/ authority archetype and the world of career and achievement.

With a stellium of six planets in Capricorn, along with Black Moon Lilith – Saturn, Mercury, Pluto, Moon, Sun, Venus – the Capricorn archetype is strongly emphasized.

Capricorn is connected with authority figures [external and internal], the super ego, ambition, duty, responsibility, hard work, discipline and pragmatism. The shadow side of Capricorn can be authoritarian, judgemental, cold, tyrannical and ruthless and can be internalized as a strong inner critic that undermines our efforts to succeed and claim our authority.

This New Moon is an invitation to reflect on our relationship with our super-ego and authority, ambition and achievement. It invites us to reflect on what duty and responsibility mean to us at this point in our lives. Remember, we have a responsibility to ourselves as well as our family and careers and party of this review may involve setting clearer boundaries.

Further challenges are emphasized by the conjunction with Pluto and the square to Uranus; they invite us to look at what needs to change [Uranus] and what we need to let go [Pluto]. The Uranus square to Pluto symbolizes the need for major re-structuring on both collective [social, economic, political] and personal levels, especially in the domains of Capricorn [public life, career, ambition, personal authority, duty and responsibility] and Aries [warrior and pioneer archetypes that require freedom to do their ‘own thing’].

Astrology suggests that we need to find a way to honour ALL urges and archetypes; any that are denied will tend to appear in their dysfunctional form either within us, or through projection. 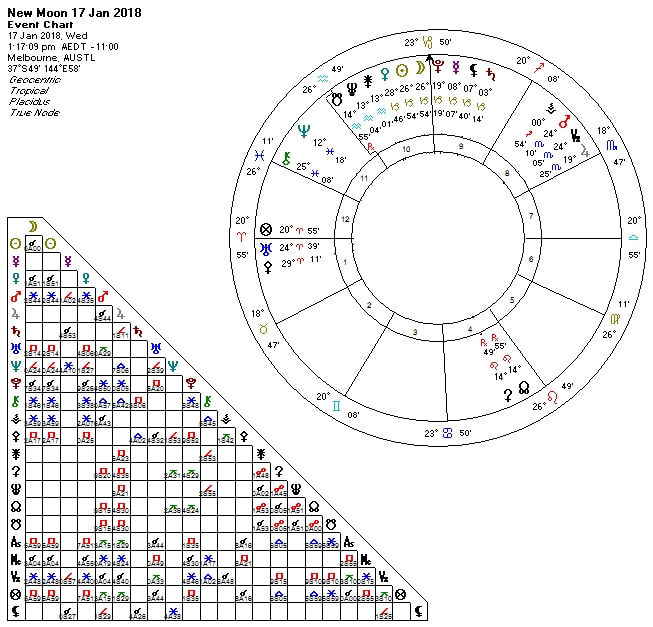 The Advanced Classes gives you the opportunity to integrate what you have learned through a seminar format that allows exposure to more advanced techniques and psychological perspectives.