December 2015 Newsletter
This newsletter is free. To subscribe just send a blank email with the subject SUBSCRIBE from the email address you wish to subscribe from – likewise to UNSUBSCRIBE.

Download File
This month there are no major new transits but we are living with the very challenging energy of both the Saturn square to Neptune that became exact for the first time last month and the ongoing tension of Uranus square to Pluto that has completed seven exact meetings and is returning to come within just over one degree of orb during January 2016.

Best wishes for the festive season

All dates and times are for Australian Eastern Daylight Time [AEDT].  December begins with Uranus and Neptune retrograde.


The New Moon on December 11 falls in the sign of Sagittarius, illuminating the energy of Sagittarius and the area of our chart [and psyche] where the sign of Sagittarius falls. New Moons are powerful times to set intentions as they symbolize the start of a new cycle. Sagittarius is the Jupiter ruled fire sign that is in a continual quest to expand its horizons and engage in the search for meaning. It encompasses the archetypes of the student, the teacher, the traveller, the philosopher and the preacher.  This New Moon always challenges us to see the big picture and let go limited perspectives. If you know your personal horoscope, this is a potent time to set an intention  regarding the affairs of the house where the lunation falls.

This New Moon is square to both Jupiter [the ruler of Sag] and Chiron, and trine to Uranus. The trine to Uranus enhances the Sagittarian need for freedom but the square to Jupiter can activate the Sagittarian tendency to excess [this is the party season]. This can also be potentially energizing, enhancing the optimism and confidence that Sag is renowned for.  The challenge is not to limit yourself; but not to overextend or over commit as well …and this can be tricky. The square to Chiron may highlight the need to be true to our self, and the pain this can cause. Chiron transits are often opportunities to re-experience an old wound – often around being different and not fitting in – and find a way to resist the urge to retreat into an old limiting story that can lead to alienation . 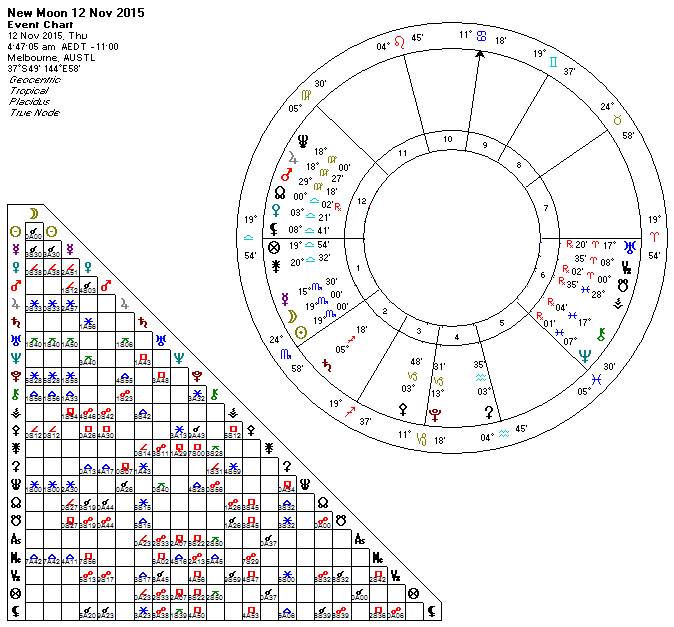 The Full Moon in Cancer falls on Xmas Day -  December 25 – heightening feelings on this already very emotionally charged day. It may be a wonderful time of family togetherness or emphasize all the tensions that are part of your family dynamics. For better or for worse this will tend to highlight any simmering conflicts so try to be mindful and make a conscious choice not to not inflame any already tense dynamics.

Cancer is a water sign that is associated with a need to belong and feel emotionally connected and secure. It symbolizes the parent / child relationship - especially the Mother/nurturer archetype - and home and family life in general.

All this needs to be balanced with the Capricorn domain which is connected with public life and career, as well as the Father archetype and our experience of authority. This full moon therefore calls us to create balance between our private and public lives, between nurturing and accomplishment and between family and career. 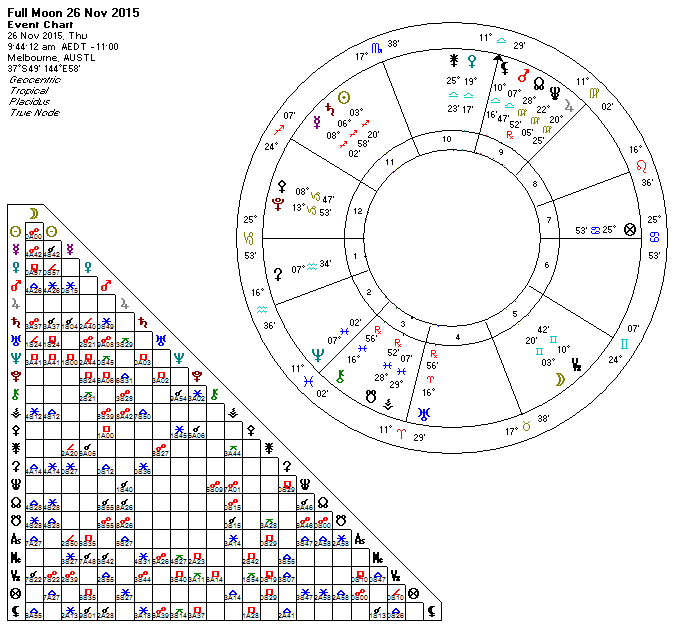 Uranus makes it station at 16 Aries 33 on December 26, adding a restless energy to the mix.  Uranus has spent the last five months retrograde - as it does each year - and it now sitting still [making his station], preparing to once more regain forward momentum. Uranus, the Great Awakener, symbolizes the urge to change, break free of limitations and express our individuality so sit with any impulsive plans that emerge around this time to make sure they are an authentic expression of your true self, not just a reaction to your circumstances and environment.

The Solstice chart contains the square to Jupiter that was a feature of the recent Full Moon chart as well as the two major transits of this period: the Saturn square to Neptune which began last month and the Uranus square to Pluto that has been a major feature of the last few years. The Sun in Capricorn square to Jupiter in Virgo is cautioning us to stay grounded and balance optimism with pragmatism while we collectively navigate the challenging energies of Uranus square Pluto [see the March 2015 Newsletter] and Saturn square Neptune [see the November 2015 Newsletter]. 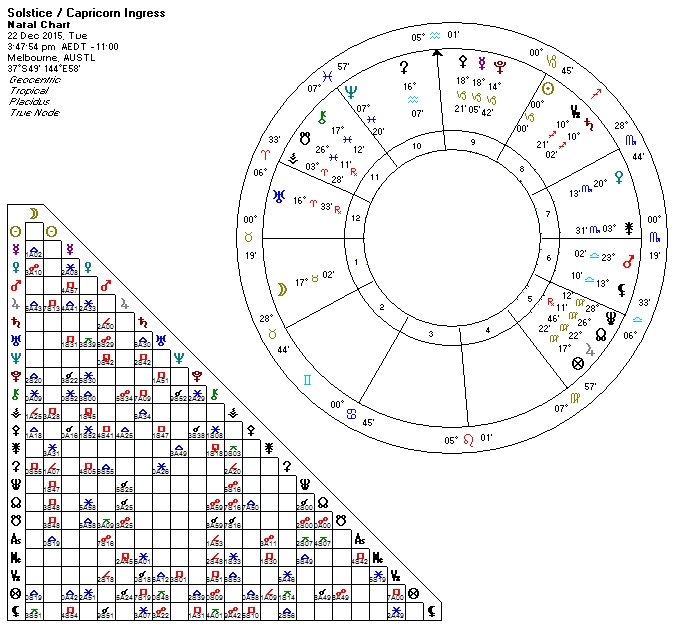 2The Summer Solstice marks the time of the longest days and shortest nights when the Sun reaches the mid-point of the cycle that began 6 months earlier at the Winter Solstice. The Solstice is a paradox that is well known to those who reach middle age – as soon as the Sun has reached the peak of His power the days begin to shorten and His power will soon wane even though the hottest days are still to come [Due to a seasonal lag in heating the surface of the Earth].


The Summer Solstice is always a time of review as it mirrors the energy of the Full Moon, both being half way points in the cycle. Traditionally it was a time of rest and relaxation before the hard work of the autumn harvest.

Christmas is a Winter Solstice celebration and always feels a little strange when celebrated at the height of summer in the Southern Hemisphere. The anniversary of the birth of Christ was placed close to the old pagan Winter Solstice Sabbat that honoured the rebirth of the Sun God from the darkness of winter. It is important to find a way to honour the Spirit of Place here in the Southern Hemisphere by acknowledging the energy of summer.

To honour the Spirit of Place you can have a special Solstice meal that includes seasonal produce – summer foods rather than heavy winter dishes we associate with Christmas. I light gold and silver candles to honour the Sun and the Moon. I then offer them my thanks for the abundance that Mother Earth and Father Sun have given me throughout the year and ask for their blessing for the harvest yet to come.

If you would like something more reflective, even as part of your Christmas meal, you can invite everyone to share their hopes for the coming autumn harvest and light a candle in a colour that symbolizes the harvest. You could use one group candle or each person could have their own candle in a colour that is personally symbolic of the harvest they desire.  As the candle[s] burns, see your desires manifesting and reflect on what may need to be done to ensure an abundant harvest.

For those of you who would prefer a more private ritual here is another offering.  Ground and centre yourself then call to your guides and angels for their guidance and protection. Light a gold candle to honour the Summer Sun then close your eyes. Imagine that you are travelling in the lunar crescent with the Goddess. She invites you to reflect on what you are seeking to manifest in your life and what you need to achieve this. Allow yourself to receive whatever you need with her blessings and visualize your desires manifesting in the weeks and months ahead.

The Capricorn Solstice is currently marking the time each year when the Sun aligns with dark band of sky near the centre of our galaxy [NOT THE ACTUAL GALACTIC CENTRE]. The peak of this cycle was December 21 2012. This event takes place every 26,000 years [approximately] and it is a 36 year process. The end of the Mayan Long Count seems to be dated to coincide with this event, suggesting that the ancient Mayans had a very advanced knowledge of astronomy and mathematics.  To the Mayans this area of the sky [the dark band near the centre of our galaxy, the Milky Way] marked the original point of creation and was said to be the pathway to the Gods who dwelled in there [in an underworld setting], in a place they called Xibalba.  The symbolism of this alignment suggests humanity has access to information directly ‘from the Gods’, but that it involves a symbolic death as well as rebirth.

For more information click here to refer to the full article, originally published in the December 2012 Newsletter but re-published at the end of the 2014 Newsletter.

What Can I Do?

This Solstice [and every Solstice until2030] is a potent time to open yourself to this energy through meditation or other reflective practices. There are two tasks on two levels of consciousness that are suggested by the imagery.

Personally we can find a way to open our hearts and reflect on our shadow, especially the fears that limit us from moving forward. We need to find a way to embrace this darkness and the fears that reside here, rather than run from them. Pema Chodron, a wonderful Buddhist teacher and writer has spent making years helping others with this very process and I highly recommend her work.

Collectively there is a need to create new heart based ways of living and being in the world including more co-operative social and political structures. For those of you who are more introverts and not inclined to social action, this is an opportune moment to send love to the planet and visualize a world of peace, harmony and co-operation.

Please ring or email for a brochure.
christinerothwell@outlook.com
Or
http://www.christine-rothwell.com/astrology-classes.html

Other readings available include:

In-depth Consultation: Two one hour CD’s exploring both the soul’s journey [see above] and the year ahead.

Relationship Analysis: Helps explain the dynamic between two people to facilitate their understanding of each other and themselves.